The First Ironman 70.3 Maine in Augusta 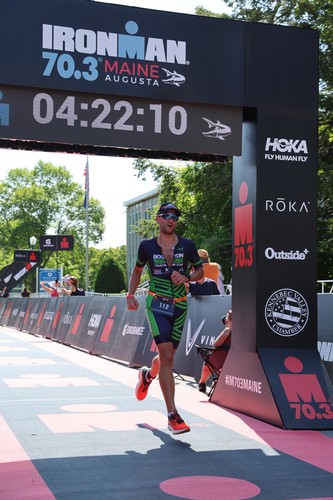 I pushed hard to come out on the podium after a tough week leading into a hot day on course. 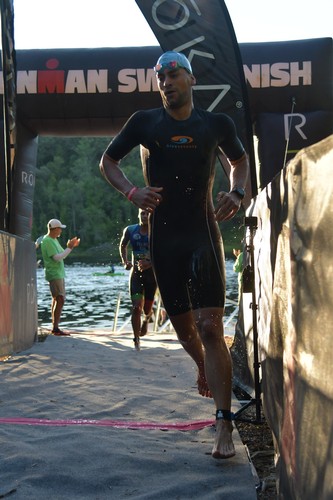 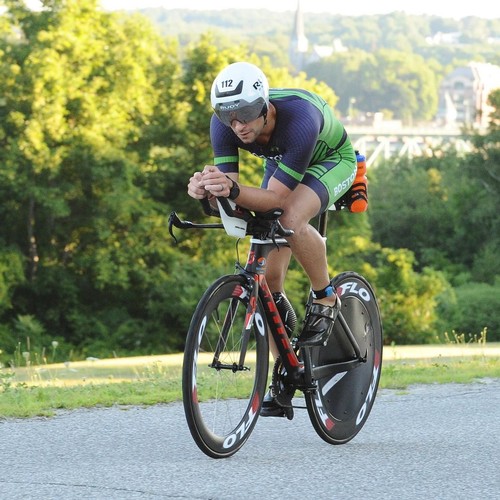 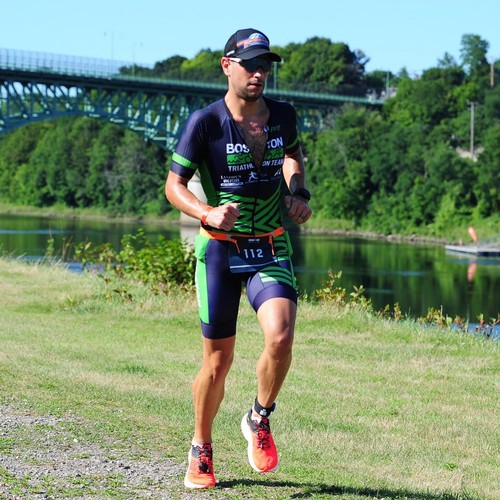 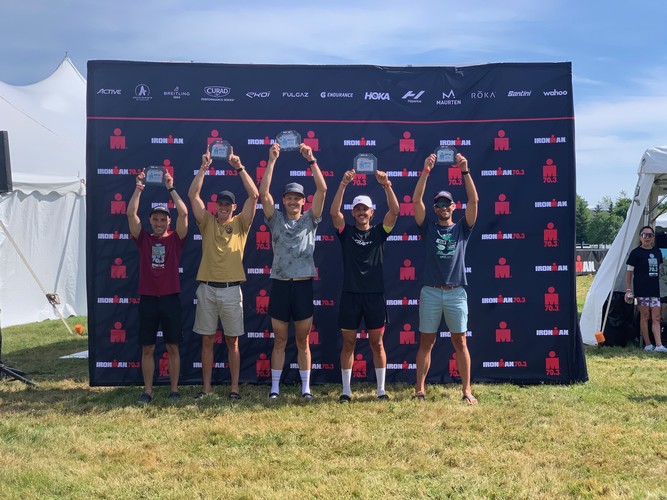 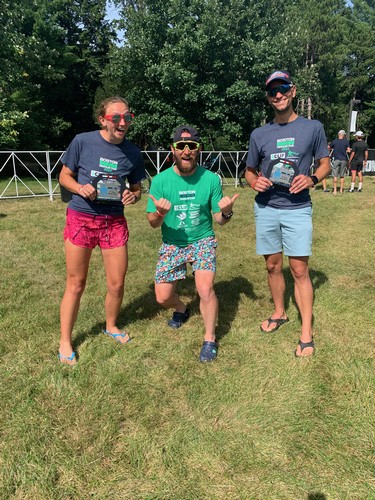 I was pretty psyched for Ironman 70.3 Maine leading up to race week. The course seemed like it would be interesting and I hadn’t been to Augusta before. Unfortunately, life happens sometimes and work stress piled on pretty heavily a couple days out. I was working some longer hours on a difficult task that kept beating me down hard mentally. Thankfully Colin had me tapering some into the race, so the physical stress of the week wasn’t as bad piled on top. When I ended the week Thursday night, I was toast. Taking Friday off to pack up and drive up was absolutely the right call, giving me a little extra time to relax and clear my head.


The trip was about 3 hours to get up to Augusta with the little bit of Friday traffic. We also took a brief stop in the middle to see some family, which broke up the ride nicely. The timing even worked out that I was able to check in for the race Friday evening, giving me even more time Saturday to relax and recenter for the race. The volunteers were super friendly and helpful as always and I got a low number thanks to my AWA status. That’s when I saw the sign about the water temperature. 78 degrees. I got more excited immediately. I love non-wetsuit swims and had thought to throw my swimskin in the bag as a ‘just incase’ at the last second. We went and found a nice little spot for dinner in town and got back to the hotel decently early to get some rest.


I got my shakeout workouts in early Saturday. It was just 30 minute on the bike followed by a 5 minute run to make sure I was happy with my setup. That ride was my first clue of what I had in store on the bike course. It was all up or down, nothing in between. I showered up and hit the hotel breakfast for my pile of waffles, eggs, toast, and bit of bacon as prescribed by my coach. Having arrived and checked in Friday, we had time to preview the bike course which I’ve never actually done before. The rest of the course was just like my preview on the shakeout, all rolling with almost no flats. I was getting more and more excited as we drove along. I love a tough bike course. The rest of the day went easy. We got a quick lunch, dropped the bike in transition, and went back to the hotel to take care of the last couple pre-race tasks before an early dinner and bed.


6am start meant 2:55 wakeup for a 3am breakfast. That’s about as early as I’d ever want to go. I put away my 2.5 cups of applesauce, banana, and bottle of Skratch with a scoop of protein and started pulling everything together to head to the venue. The 5 minute drive went smoothly and it seemed like everyone else wanted to get set up early because the place was already packed 10 minutes after transition opened. It was only 4:40. Transition setup went mostly smoothly despite everything being covered in dew. I couldn’t get the inflator cover to stick well on my disc cover and decided not to stress about the sticker. I walked my transition bag back to the car for safe keeping and made my way to the swim start.


I used the 1.2 mile walk up river as an opportunity to get in a warm up shuffle jog and got to the start just a little early. It was a beautiful morning and it was nice to have a little bit of time to get up to the front for the self-seeded swim. I ran into another guy from Blue70 Racing who I had only met on the internet and he was nice enough to zip up my swimskin for me. Having a little help on that is nice since I didn’t feel like contorting myself to get that done on my own. The nerves weren’t bad for the race. I was way more excited to fly down the river as I watched the water lazily flow by.


They let us onto the starting dock with about a minute before the start and I found myself in the first wave of three as always. When the cannon went off, I dove into the water and surged hard to stick with the group hoping to form a gap from the next waves of athletes. We settled into a really nice pace and were cruising down the course. One other guy and I were at the front and I couldn’t really tell how many were behind us. I saw one set of arms behind him and whoever was behind me kept touching my feet which was incredibly annoying. After a few times, I tried to get him to back off by slowing up a hair and kicking hard. It didn’t work. I lost track of how many buoys we passed and we moved down the course. I wasn’t worried about it since I never really felt like I was pushing that hard. I knew I would have the stamina to make it through regardless. We finally made it to the turn buoy and the people drafting finally surged to beat us to the shore. I made the calculated decision not to put up a fight for the 100-ish meters. I knew what was coming to get to T1 and figured I could catch them in the beginning of the bike course if I didn’t make the pass in transition.


T1 was a little over 0.3 miles long getting up the hill to the bike path and then up the access path to transition. The long run up to transition gave me plenty of time to get the top half of my swimskin off and go through the rest mentally before I had to do it. I made one pass up the hill and made another one in transition itself. One of the volunteers told me I was 3rd on the course and I got to work.


The initial stretch of road was rough. I hit a couple bumps and felt something bounce off my knee. When I looked down I saw that I had ejected a couple Gu’s. I just barely caught the third one that was on its way out and shoved it in my trisuit pocket. I heard something else bounce on the road, but didn’t think too much of it. Once I was around the corner heading onto the bridge I realized what the noise was. My flat repair kit ejected itself too. There was no panic. I just said to myself that I just had to ride the course perfectly and hope for the best. I cranked up the hill after the bridge and made the first pass on my way out of town. I  made one more pass and then was by myself for a while and had a bunch of fun cruising up and down the rolling hills. There were way more people hanging and cheering out at the ends of their driveways than I expected. It was great to see so much of the community out supporting. There were a couple points where my mind started to wander a bit and I think it was from straight mental fatigue going into the race. The couple times I got passed were during those lulls, which thankfully snapped my attention back to the task at hand. I’m sure they would have caught me either way, but it was a bit frustrating. There was one more guy that passed me with about 15 to go and I got him back when he slowed down to eat on a hill a couple miles later. He got around me with about 5 to go and I let him go knowing the last few miles were going to be on pretty rough road and I didn’t want to wreck my legs chasing going into the run.


The road sucked for the last mile or so, but there were so many people out cheering that I didn’t mind it at all. I guess there was a photographer for one of the local news sites along that last since they caught a pretty good picture of me flying by some spectators with a goofy smile on my face. The picture wound up being the thumbnail for the articles about the race too which was pretty cool. Check it out: https://www.facebook.com/CentralMaineNews/posts/pfbid02T6KCbbuWUriH59gthUCUcqdPFZPUw5KLerXVn6TqEGLGAvzhnnAfJMcHExvL8o9Yl


As I got into T2, one of the volunteers reminded me that I was in 5th going out on the run. I generally do my best not to think about that sort of thing going into that last leg. I don’t need more pressure on myself to run well. The thought of getting through it is more than enough. I stuck to the pace plan in the opening miles, keeping it on the easier side in the first two to get my legs under me and then twisting the throttle at mile 3. Around mile 4 is when I got to the first hill. It was super steep to get up from the bike path to the bridge, but thankfully it was only steep for a hundred feet or so. I kept my cadence going and slowed the pace to get up it and recovered pretty quickly. I ran around the loop by the fort at a decent clip and headed back across the bridge before having to get back down the steep. That got sketchy and I did my best to keep it from worrying me for the second loop. I cruised down the bike path to the turn around at the other end of the course in Hallowell and got my mind ready for the second time around. I hit the steep again and that’s when things started to fall apart. I’m pretty sure the gels I dropped on the bike were coming back to bite me. It took way longer to recover from the steep and by the time I got into a rhythm again I had to run back down it. I managed to recover from that a bit down the bike path around mile 10 after seeing a few Boston Tri Team teammates. It had gotten pretty hot by that point and it was really starting to get to me. I ran by a friend of mine who was running the opposite way and there was a high-five exchanged as we passed each other which helped snap me out of my funk. (I know exactly how lame that is - I have no shame about it) I told myself it was just a 5K left and gave it everything I could to only lose about 45-60 seconds off the pace I had been holding before. After what felt like the longest miles of the race, I finally made it to the turn up the hill that would take me to the finish line. I emptied the rest of the tank getting there and was stoked to run around that last corner and down the carpet to come in 5th in my age group and 12th overall.


It’s not my best result, but I’m proud of the performance on the day. I gave that race everything I had and learned a bunch of great lessons. I hung around for the world championship roll down and got a slot to go to Lahti, Finland next summer. I’m so ready to give it my all again at Timberman next month and Kona right after!