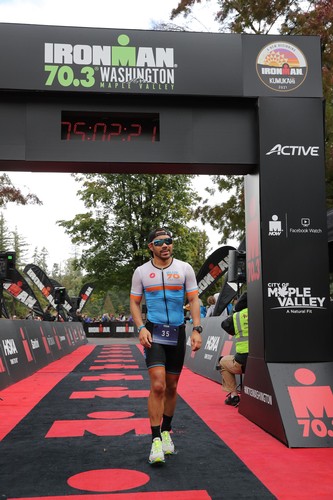 I’ve been racing hot races all year so when I finally get a cool one, of course it rains. 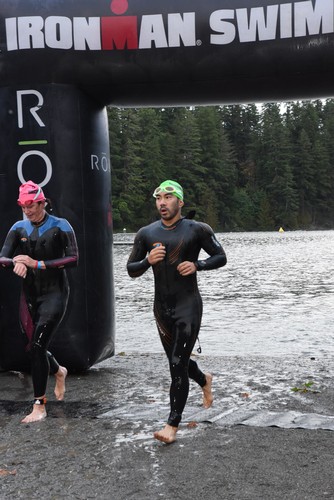 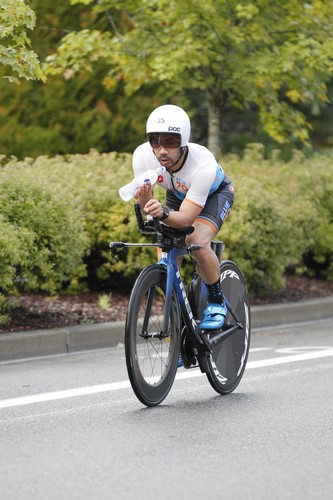 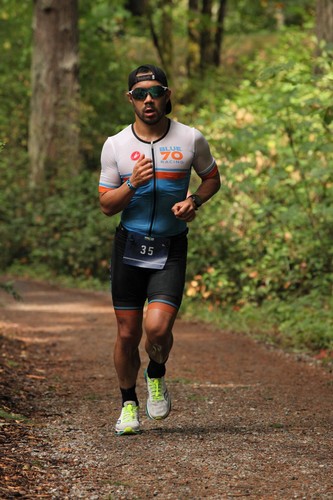 This was my final race of the season and of course it would not be complete without some mishaps along the way.  First, my gear did decided not to get on the plane with me when I left Columbus on Thursday which would throw a slight wrench into my Friday morning sight-in swim and recon ride plans.  A slight inconvenience, but I adjusted some plans and nothing like a $300 travel voucher to take the sting out of things.  Check-in was smooth and my swim was relaxing, but when I went to pick up my bike from TBT I was informed that I couldn't because it had gone to St. George instead, which was quite the pickle.  I was promised that my bike would be there the next morning so I just packed it in and met some friends in town to relax.  I'd survive a few more mishaps between then and race morning but it was long season and I was ready to get this one over with.


I made it to the race venue nearly around the same time transition opened and the weather couldn't decide whether it was going to mist, rain, or do nothing at all.  I laid everything out and went to the swim start to dip my toes in the water to test it out.  It was going to be a morning where the water was warmer than the air, but the lake was calm so I was hoping for a good start.


The swim was delightful.  I started myself in the 33-35 minute group as I had been having some good final sessions in the pool. The water was clear and I was unobstructed for the most part and only lost sight of the buoys once.  I felt like I was moving along and was pretty excited to see that I was just over 36:00 when I got out of the water.


Everyone else in transition was putting on jackets, vest, and arm warmers.  I brought none of those things, so I didn't have a choice but to just grab my bike and go.  I had looked at the course map so I was vaguely familiar, but I regretted not going on my recon drive to develop a better strategy.  I felt like I wasn't dealing with the cold very will and it felt tough to put down power.  The first half felt like I was eating wind and peddling through sand but the speed was matching the power so I kept pressing on.  We got to the bottom of the course and had a little tailwind to help us make up time on the way in.  I finished the bike with numb feet which nearly caused me lose my bike at the dismount line but we saved it and made it in to transition without much trouble after all.


My feet were still slightly numb when I started but my legs were turning over quickly and I felt pretty strong.  My watch wouldn't lock on to the satellites due to the trees on the course so I was having trouble finding my pace but it felt much hotter than I wanted.  The first part winds around but once we make it to the rail trail it straightens out and my watch locks on and confirms that I'm running in the low 7's, about 30 seconds faster than PR pace and certainly faster than I was hoping to start.  We decide to ignore it and gun it and I'm gaining more and more confidence as the miles just seem to fly by.  I worry that I'm running at a pace I can't sustain but I get some confidence as I make the turn, cruise on the downhill, get some motivation from my teammate Josh who was volunteering, and make it back to the last little kicker at mile 11 that finally breaks me.  I take a quick pause to take two Cokes from the last aid station before finally gutting it out to the finish.


After nearly missing out on racing completely in 2020, I came back with a fury in 2021 but I'm glad my season is over.  I had a great season training, racing, meeting teammates, making friends on the course, and representing our team.  I'm ready to shut down for a little while before the winter grind and ready to suffer again in the spring to have a fun and even more successful 2022 racing season.