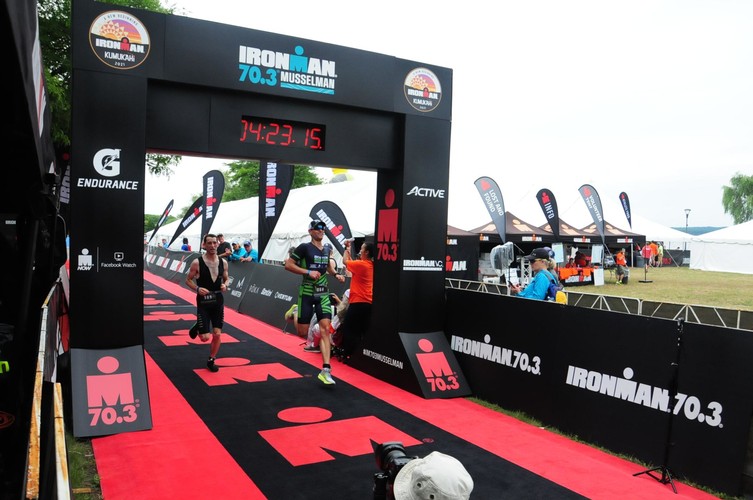 I had another very solid race with a bigger field and saw how hard I could push myself. I took an age group 2nd and 7th overall out of a roughly 1100 athlete field. 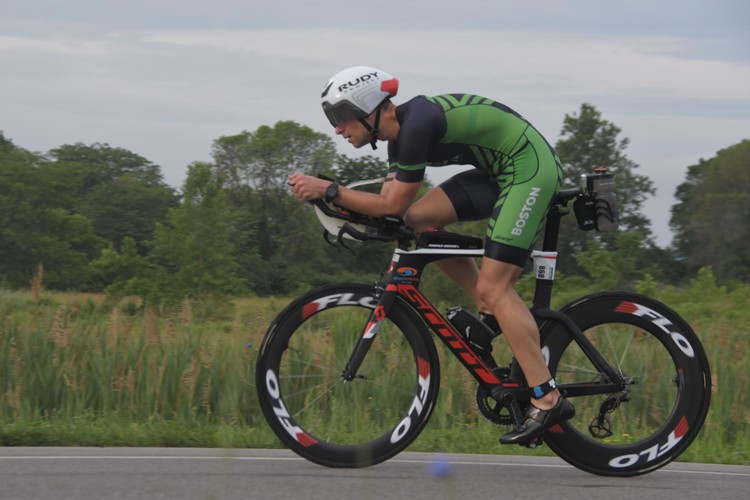 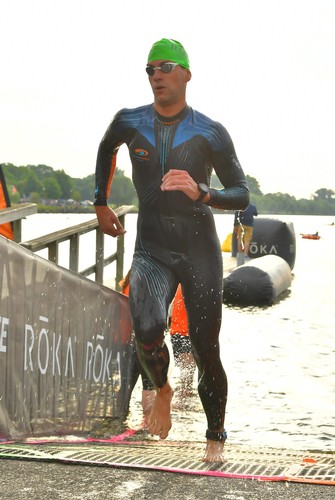 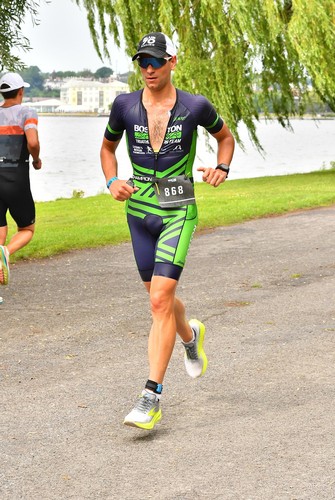 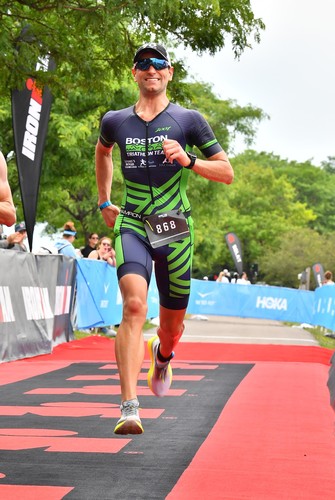 I really like a self-seeded swim start. I pushed up to the sub-27 group and wound up as one of the first in the water. There was a decently steady wind toward shore which made for some light chop, but I knew I could handle it. By the first buoy I had latched on to the draft of 2 other guys going about the speed I wanted to. One of them was swimming pretty wildly so I had to gie him a little space to avoid getting the **** beaten out of me. Unfortunately, a little space turned into a lot of space on the outboud leg and I found myself way out wide in the kayaks. I worked pretty hard to pull back in and catch up, but I made it. The same thing happened on the inbound leg and I decided to let the 15-20 second gap stand and conserved energy just swimming out the leg with the wind behind me. I finished the swim in 26:38, which was good for and age group best and 3rd overall. Considering the conditions and my navigation mistakes, I'm happy with that.


The run from the swim exit to my transition spot was pretty cool. I got to hear the announcer try to pronounce my name and had a surprising number of athletes cheering for me while they were waiting for their start. The transition turned out to be fast enough that I made a pass at the mount line and started the bike in 2nd place.


I went harder on this bike leg than I did at Patriot. It was a rolling course pretty similar to Patriot, so I thought it would suit me pretty well. My swim mistakes came back to haunt me for the first 10 miles. I swallowed so much lake water that I was too busy puking that up to get much nutrition down. Once my stomach setlled in, everything was clicking again. I was buzzed a few times by the referee, which was kind of wierd. It was also a little surreal that I didn't see any other athletes for the first third of the course. The only racer I saw came up along side me like I was barely moving and gave me a quick "good work" before leaving me behind. Those Every Man Jack guys are crazy fast. He stayed in sight for the rest of that straight section but I had no interest in burning matches trying to chase him down. I was already feeling fatigue creep in and had half of the bike to go, including the only real hill on the course. I though I was going to crack on the hill. My pacing was better than Patriot overall not having to make passes, but my power target might have been a little agressive. I held around .85 IF for the first half and backed off to .79 for the second. The second half being net downhill and paved way better helped a lot. I felt like I was on a rocketship for about an hour. There were still point where I felt the fatigue and managed to snap myself out of it. A guy yelling "you're in 3rd!" at me at one point helped a whole lot too. Despite the higher power, I wound up with a lower average speed than Patriot, so something funny was going on. I'm chalking it up to rougher pavement and having to sit out of aero in some of the really bad sections. My bike leg wound up at 2:17:49 which was age group 2nd and 7th overall. I think this just came to execution. I needed to stay aero more and lost time not pedalling on some downhills or through the corners.


T2 is always hard for me. My feet got so messed up with locklaces at Patriot that I decided to just tie the damn shoes. I really felt like I was in kindergarden again trying to get my fingers to tie my shoes which felt so foreign. That delay allowed for another pass. I came out of transition about 30 seconds off 3rd place, which meant I just barely missed getting a picture with the bike chaser. My plan for the run was run aggressively but still within myself. I only got half of that right. I went out way too hot all the way to the hill at the 5k mark. The hill really reeled my pace in, but the damage was done. My whole abdomen cramped up on the downhill so I got to run through that for what felt like an eternity (maybe it was just 30 minutes). I'm pretty amazed that I was able to hold pace through the pain for that long. Around mile 9, I saw my fiance for the fourth time, which might have been what let the cramp finally relax. The hill came again at mile 10. I started picking the pace back up at the crest knowing I there was less than 5k to go and it was all flat after the downhill. I made a whole bunch of passes by all of the folks who also went out too fast and realized there was still another loop to go. I was already running at a pretty good clip after the split from the loop point when I saw my fiance who warned my that someone was coming up to pass me. He came around right at the turn down the finishing straight and instincts took over. We were both sprinting all out for the line and I just barely edged him out in the last few strides. I have no idea where the energy for that drag race came from. My run split wound up at 1:31:45 which I am very happy with. That's my best ever run split!


The official time was 4:20:44 for age group 2nd and 7th overall. That's another 70.3 personal best. I feel like I get better every time I race and can't wait to see what I can do stepping up to the full distance in September!