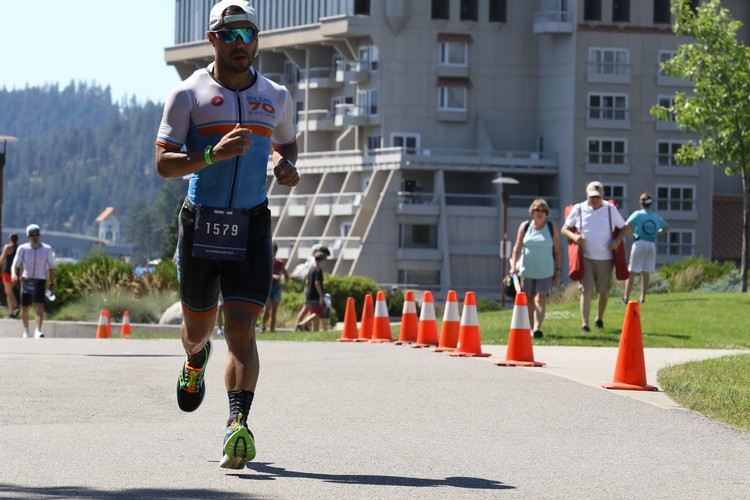 June 30, 2021 - Extreme heat batters IRONMAN athletes and claims over 26% of the starting field.


After watching race after race disappear from my 2020 schedule, the hopeless optimist that I am registered for IRONMAN Coeur d’Alene within minutes of receiving the email saying priority registration was open.  Moments later a friend called to let me know that he had just registered and booked a lake house for me to say in which meant the only thing I had left to do was to tell Tribike Transport that I now had a home for a previous deferral.


Trying to turn around after a tough race at 70.3 Blue Ridge just three weeks before would be challenging and I was on the low end of where I would have liked to be with my bike and run volume.  I managed to squeeze in a few quality sessions just for mental confidence and refocused my attention to something that would prove to be the biggest challenge of all: the temperature.  Having lived, trained, and raced in Texas for several years, I was able to draw on my past experiences about how to prep for efforts in the heat: hydrate, continue to hydrate, and keep checking the weather forecast to see if it has changed in the last 20 minutes.


People seem to say that there are four disciplines in triathlon, the obvious three and then nutrition.  I add a fifth, which is recovery, and I discovered a sixth: keeping your cool when things don’t go your way.  I had been getting emails from the airline for future flight changes as the travel scene was reopening, so seeing something from them on the day I was supposed to travel wasn’t unexpected, except this one had the words, “Your flight has been cancelled.” (Start to panic) Luckily, a little bit down the email were the words, “You have been rebooked,” and I would actually get to Coeur D’Alene earlier. (Relief) Unluckily, while on my new flight I received another email telling me that  the rest of my flights were cancelled and I would have to stay the night in Vegas and fly out the following morning. (Resume panic) I start searching for any and all options to get to Spokane, including flying to other cities to try and connect, flying close and driving, anything other than leaving it to chance that the next day’s flights would be cancelled.  I soon found out I wasn’t the only person in this situation and a family who had flown from Columbus where I’m from was in a similar situation as they had come out to watch their son race.  They told me to switch my flight to Seattle and they would drive me to my rental car in Spokane.  (Nervous excitement) After an adventure finding my checked bags and making sure they get on the new plane, a few hours of delays, and a nap, we make it to Seattle at 3:00AM and try to nap until the car rental place opens at 6:00.  During the drive, I learn that one of my saviors actually works at the same company I do, but thanks to remote working, we’ve never crossed paths despite working in the same function.  (Relief) I finally make it to the Expo, hopefully on the positive side of karma and joke that I’ve already gotten the hard part out of the way so the rest of the weekend should be smooth sailing.  I get checked in, retrieve my bike and make sure it works, and test the waters in front of our lake house with a 1000yd swim and start to wind down and relax.


The next morning I do my best photographer impression at the Ironkids race for my friend’s family, shake out my legs on with a quick run, finalize checking in my bike, then do some bike course recon in the comfort of an air conditioned SUV.  We finish up early and I meet Lance and Saul from blueseventy at the coffee shop and teammates Johnny and Sammy ended up there as well.  We chat for a while before I head out to scout a place to park in the morning, make my final preparations back at the house, and then settle down for the night. Despite my best efforts, looking at the forecast had no effect on the temperature and I was expecting to be greeted by 100 degF temperatures by the time I was predicting I would be on the run.


I drive my friend to the race so his family can grab a couple more hours of sleep - the kids are young and the had a long hot day ahead of them.  We find the spot I scouted and go to set up transition and head out to seed ourselves in the swim.


Johnny found me in the line among the 70-80 minute swimmers and entered the water around the same time.  I settled in at a nice pace in the cool crystal clear waters of the lake and CDA quickly replaced VBR as the most delightful swim I’ve ever had in a race.  The first 800m were calm and I felt comfortable, but the further we got from the shore the water became slightly choppy and there was a ton of traffic around the first turn.  The second turn became chaotic as swimmers struggled to sight with the angle of the sun.  I lost my bearings and had to pull up to figure out where I was and where I was going, found a landmark and tried to get back on track but it wasn’t for another 100m or so that I was actually confident I was heading back in the right direction. After the Aussie Exit the rest of the swim was more relaxed and I had confidence my new sighting target would get me out of the water.


I started feeding as I was running out of T1 and once I got out of the residential area I started to hydrate.  I used every aid station as an opportunity to douse myself and drink from my BTS bottle, pick up a new bottle to top off my BTA and douse myself, then took a fresh bottle on the way out to repeat at the next aid station.  My main mistake from Blue Ridge was holding high power up the climb and neglecting my heart rate and hydration and I was focused on not making the same mistake twice. Despite pulling in the reins on the climbs, I was still eating up the faster swimmers and my confidence was growing.  I was feeling much better than everyone else looked and was executing my race plan.  The top pro men passed me as I finished my first lap and I was in awe of their power and I saw Sam and Lionel out on the run as I looped around back to special needs.  I took care to mind my effort and stayed on top of my hydration as I could start to feel the heat radiating off the tarmac and to add insult to injury the wind picked up slightly on my last trip in and the athletes heading the opposite direction did not have the same smiles on their faces as the athletes did on my first lap, for good reason, apparently the road temperature was close to 140 degF.  However, I still felt strong on the last climb and made it into T2 only just slightly behind my target time.


The legs feel decent and I find a steady pace.  I see some friends who came out to support early on and they give me some encouragement.  I see Lionel walking and remind myself that I still have many miles to go and need to keep my cool if I wanted to finish strong.  My friend from home is on his second lap when we pass each other, he’s looking great and supposedly, between ice baggie refills at the aid stations, I was looking great too.  I see my friend's family again when I get back to the park and I get the news that he is in the top 10 of our AG which excites me.  Apparently I’m doing okay as well.  I stick to the plan and as I cross paths with my friend I hint to him that he needs to keep it together (he does).  The family who helped me out in Vegas cheered me as I ran by their house and Sammy kept giving me encouragement and I give what I can until the 22nd mile.  Internally I do the math and figure out I’m in good shape to finish under 12 hours.  I do some more math and figure out that there’s a chance I can finish with a sub-4 marathon, which would be a first for me.  I watch that dream slowly melt as I start walking in between aid stations and I’m just holding on.  I hit the final aid stations and thank the volunteers one final time, grab a Pepsi for the final kick and it puts some pep in my step for the final mile.  The park is electric by now and they’re feeding me energy.  I pick it up and make that oh so sweet veer left to the finish instead of laps 2 and 3 to the right.  Pump up the crowd a little.  Quarter of a mile to go.  Cheers from by-standers and volunteers on the bridge.  Pick up the pace a little more.  Slight climb to Lakeshore Drive.  More energy from the crowds.  Turn on to Lakeshore and see the downhill straight to the chute.  Play to the right side of the street.  Play to the left side of the street.  Appeal to both sides of the street and soak in the cheers.  Airplane to the chute.  High-five my friends.  Applaud the crowd.  Finish.


IRONMAN Coeur d’Alene was the most incredible race experience I’ve ever had.  The town was welcoming, the venue was superb, the support was unmatched, the energy was electric, the course was breathtaking, the conditions were brutal.  I watched so many athletes give everything they had and watch the course take it from them and more.  I was elated to finish and happy for my Kona-bound friend, but at the same time I was devastated for the other athletes who wouldn’t make it to the finish or had already been forced out by the conditions.  I raced my race and stuck to the plan and crossed the finish line standing up and while I think I could have given a little, I can’t be mad at myself for executing the race I wanted to a tee.