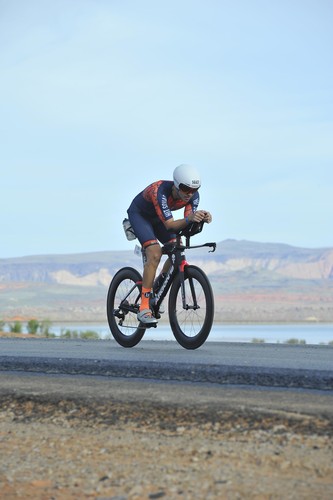 Not the race I knew I had in me but the race my body gave me on the day.

This was the 3rd 70.3 distance race I’ve raced. Of all the three, this was the one I felt the most calm and confident due to my solid training buildup. Body was rested and ready. My goal was to finish in under 5 hours but as things sometimes go, I finished a very tough course in 5:32:32.


The swim started earlier than expected due to great organization and logistics. We hit the water at around 7:35 am. My goal was to get out of the water in under 40 minutes and my official time was 39:12. Water was slight less cold than it was on Thursday so I was quickly able to get used to it. I left maybe one or two minutes due to some “traffic” and having to tread water in order to locate the buoys but the most important thing was that I came out of the swim feeling fresh and ready to attack the bike leg of the race.


Got on the bike after a long T1 (long run and had to put all swim gear in a gear bag before leaving on the bike) and was immediately welcomed by a short but punchy hill. Most of the course was hilly but it had some flat sections and very long and fast descents. At about the half way point I began feeling some discomfort on my right side (side stitch) but it never got so bad that I had to stop or slow down. The climb up Snow Canyon was brutal but with incredible views (just like the entire course). The last 7 miles were all downhill and I was hoping that during this time the discomfort on my right side would go away but I quickly found out as soon as I got off the bike that it was about to get worse.


As I began the run the pain got so bad that I knew I was not going to be able to run so I had to jog / walk the entire first half of the run course (6.5 miles). At this point I considered dropping out and taking a DNF because I really wasn’t ready to walk an entire half marathon. It was a hard battle mentally because my legs felt great and I knew that the fitness was there and yet my body was not letting me show it. Eventually at around mile 7 I was able to begin running as the side stitch subsided. Thankfully most of the course from there on was downhill and i was able to put in a decent 10k to finish the run just under 2:00 hours.


Overall I’m happy with the results. It was the hardest course I’ve raced and overall one of the hardest overall 70.3 courses. I’m especially happy with the swim, which is the leg that gives me the most anxiety. I was able to swim calmly and with confidence. I will build on that for my next races. My other take away is that I definitely need to put in more work into strength training to allow me to push a bit more on both the bike and the run. On to the next big race, which will be USAT Age Group Nationals in Milwaukee in August.

Great Job, this is definitely a tough course!