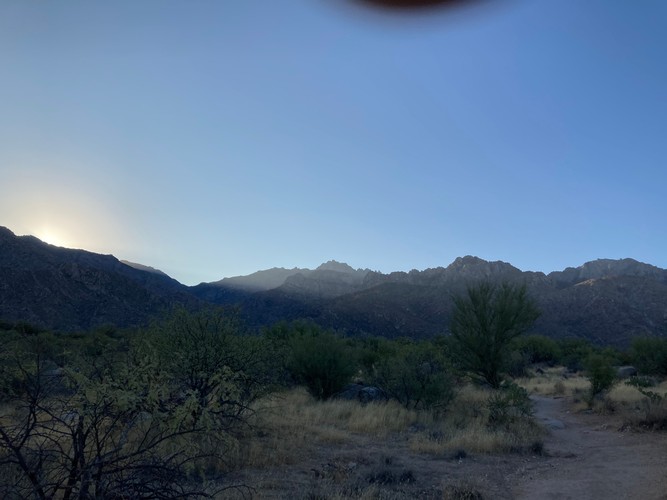 
The race started out with everyone having to wear a mask while in the parking lot warming up and for about the first 400m of the course.  The start of the race was a staggered start with about 12 people per wave.  We were not allowed to stand next to each other as there were dots on the ground where we were supposed to stand before receiving the start signal.  The dots were placed about 10 feet apart from left to right front to back in two rows.  This felt a little awkward at first but was one of the best starts ever since there was no fighting through traffic and tripping over the slow person who wants to start up front.


Once given the start signal, we were off with a straight shot for about 400m before taking a right turn onto the single-track trail.  Once on the trail off came the mask.  The first part of the trail was on fairly level ground and decently packed trail except for the creek beds where the sand was looser.  As I was moving through the flats, I began to start picking off runners until the first hill which felt like it was strait up and down.  This did slow me down as the hill was lined with railroad ties to create steps, uneven steps, but they were steps.  I did walk the steps since I couldn't get a rhythm due to the unevenness of the steps.  Traversing this part of the course meant having to come down, and yes there were more steps and more walking.  If I had wanted to walk, I would have gone to Colorado to golf with AJ.


After coming down I had to go back up again but not as steep just so I could run a mile of soft deep sand.  You know what, running in this sand was much better than running through sand wearing fatigues and carrying an M-4 and the people chasing me weren’t shooting.  Anyway, did I mention that the area we were running through had been on fire recently.  The vegetation on one half of the course burned up but the area on the other side of the creek was still green.


After running through the burnt side of the park I made my way to the green side with large Saguaro Cacti lining the trail and a beautiful look at the Catalina Mountains.  This trail was a short loop but before getting there another steep climb awaited the runners.  The climb was much easier going up then coming down.


Loop two was the same as loop one except that I started to notice that I had begun passing runners that had started in a wave or two in front of me.  While on the second loop and running through the area with the Saguaros I was passing a couple of people running the 5-mile course when I could hear footsteps and breathing behind me.  As I plodded along the steps got louder and I got faster.  There was no way someone was going to pass me on the last half mile of the course was the thought running through my brain.


Before I knew it, the other runner was right on my heals but he just didn’t have enough juice to pass me.  I wasn’t sure if I had enough left in the tank to keep fending him off.  As we came into the finisher’s shoot, I did cross the line first, but I don’t know if I actually beat him due to the wave start.


Once we finished coming through the shoot we did stop to talk, and I thanked him for pushing me through to the end and he thanked me for making him work a little harder than he wanted to do.  Then we did the fist bump and went on our merry way.


The funny thing is I didn’t think I would be anywhere near the podium, but I finished 3rd overall in my age group and 28thoverall with a time of 1:40:04.