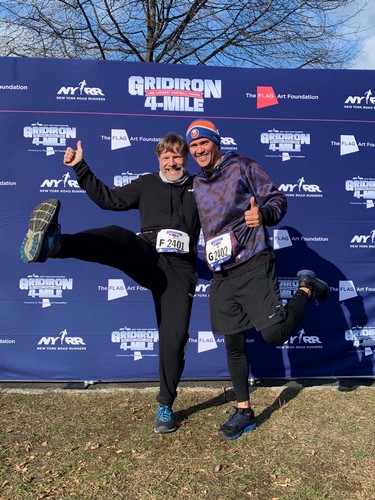 A solid 8 pace through a bumpy 4 mile circuit inside Central Park. Crowded through mile 1. A cool but clear February day run where rolling natural scapes painted on a city scape canvas wows participants.

In the spirit of New York City, city dwellers and suburbanites alike gather to run the Gridiron, a 4 mile circuit inside central park the morning of Superbowl Sunday. Pre-race, passionate runners line up to throw the pigskin for the long toss challenge, if for no reason other than to see an official count to how far they could actually throw a football.


This year over 5000 participants lined up in organized wave start, pre-sorted by pace. NYRR is an experienced organization, as such, members’ pace is calculated for them based on the previous 12 months of competition.


The weather was a cool 35° to start and the sky was clear.  It’s a social crowd… conversations and experiences are shared liberally between course racers.


The 4 mile course can be broken down into two hills, the first, a gentle 75 foot elevation climb, starting at the half mile mark through 1.5. The second hill is a steeper 50’ rise beginning at mile 2.5. The last mile is relatively easy sailing through to the finish.


Race organizers did a good job, but fitting 5161 finishers on a 4 Mile course, inside a, albeit beautiful, world class park is a trick and a half.


The first mile was a bit congested. I found myself weaving a bit around traffic. What’s more? I had to hit the brakes several times, especially on the first downhill. I’ve always known tapping your brakes wreaks havoc on your gas mileage.


Things sorted out as I approached the second half. I generally throttle pace for an even power output. I thought the first hill was more difficult than the second likely because  I was handicapped by traffic.


Scenery was fantastic. It’s a rich natural rolling scape a front a backdrop of both tall historic chiseled buildings and tremendous  skyscrapers filling out the horizon. There is never a dull moment.


I turned up the heat a little bit for the last mile. I made that one my best. I pretty much ran an 8 pace but just mismanaged reverse splits, if that is even practical on a hilly course. Maybe next time.


In the end, the ebb and flow made PRs elusive, but I got mine! Did I say it was my first 4M in Central Park?


Live Long and be Fit.