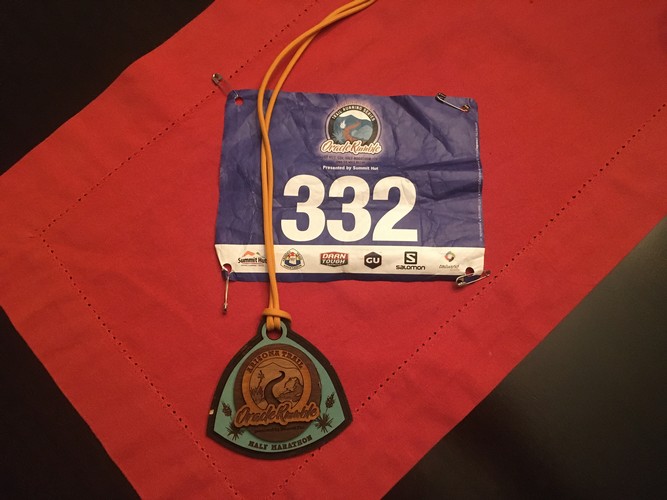 Half Marathon trail run through the Santa Catalina Mountains. 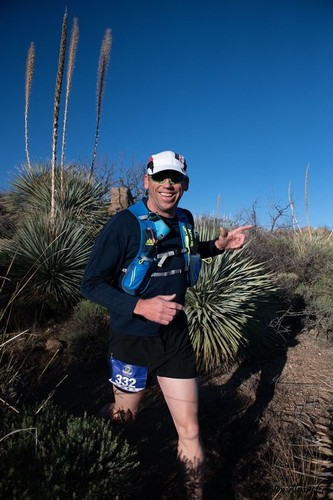 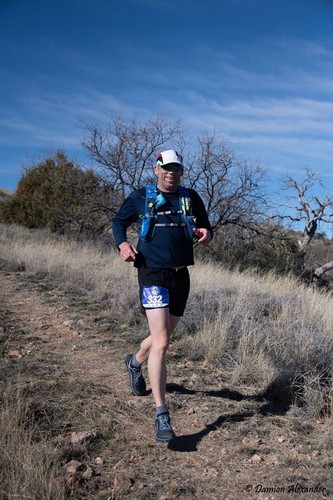 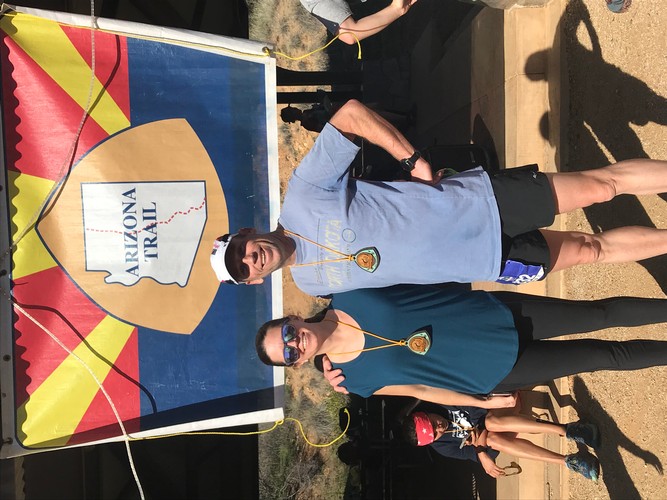 The race weekend started out great as my wife and I stayed and visited our friends in Tucson, AZ, the same friends who were able to get me to agree to run the race.  The day before the race I went out for a 22-mile mountain bike ride through the foothills of the mountains, which may have not been the best thing to do before the day of the race.  But, what the hey, in my mind this was just going to be another training day.


The day of the race started out with me and my friend Liz getting ready to go to the race site and a stop along the way at Starbucks so she could get some coffee and we both had some oatmeal.  I don't recommend the oatmeal from Starbucks.  Once at the race site we stood by a campfire to keep warm until the runners were called to the starting line which was about a quarter of a mile walk from where we were.  While standing around the campfire there were a lot of introductions going on and some general conversation.


As the race started, we ran about quarter of a mile on the street before hitting the trail which went straight up but this did not feel like the worst climb of the day.  As we started climbing the runners started to separate as those that were really fast began to disappear.  As the race progressed, I was able to figure out who was running about the same pace, as I was, in front of me and who I was going to catch.


When I race, I look at those in front of me and I use those racers as short term achievements to keep me focused.  I had set my focus on a girl with a red hat and red running vest with vertical stripes as she was about 10 runners ahead of me.


As we wound through the hilly terrain, I started passing runners slowly but surely and I ended up passing the runner I was trying to catch about around mile 10 after climbing an incredibly steep switchback climb.  Yes, I did do some walking on that climb.  After I passed my prey, we preceded to run the trail and I accidentally took a left instead of right allowing her to repass me.  I went off course for about a quarter mile before I realizing I was going the wrong direction.  All I could hear in my head was “Smalls, you’re going the wrong way!”  So, when I got back to the point where I made the wrong turn, I saw girl with the red hat heading up the next hill, in the right direction, I looked to my right and saw my friend Liz coming down the hill towards the turn and gaining on me.


Now I had two goals to focus on with the first making sure that Liz did not pass me and the other being able to catch the girl in the red had in front of me.  It would be a little while before I caught the girl in front of me, but I did it on this long uphill sandy wash around two miles from the finish.  The long sandy wash really took a toll on my legs as the sand was loose and unforgiving.  Once out of the wash and climbing another steep hill I kept seeing a girl wearing a turquoise shirt behind me and I thought it was Liz as this girl was closing fast and I was gassed by this time.


As I was passed by the girl in the turquoise shirt, I realized it wasn't Liz and that Liz wasn't far behind her and closing.  Now we are about a half mile from the finish and the trail goes downhill then up hill in a V pattern.  The downhill wasn't bad but then there was the uphill.  The uphill may have been a 30-50 foot climb but as far as my legs were concerned it was K2.


On the uphill someone designed the trail to have railroad ties placed along the way which tickled played my brain a bit.  There were only about 3-4 ties but every one of them felt as though I was doing 48-inch box jumps, since my legs were so tired.  I couldn't stop and whine as I knew the finish line was not far away and that I still needed to beat Liz.


Now for the generic stuff, the weather was purrrfect with the sun shining and maybe a light breeze.  The venue is excellent, and I recommend anyone wanting to get out of the cold and enjoy a weekend in the Southwest come and run one of the many distances offered.  https://runazt.org