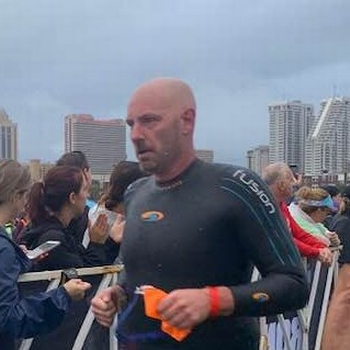 I was an international caliber swimmer throughout college. Between family and wanting to build a career I abandoned swimming (and exercise for the most part) until my late thirties. I was working in Bend, OR at the time and a buddy of mine who was doing triathlons asked me to look at his stroke. One thing led to another and I entered my first triathlon in 2009. Ten years later, I have 3 Ironman finishes, a dozen or so 1/2 IM and numerous open water swims - most of those in the top 1% out of the water - 2016 IM World Championship - first 45-49 out of the water.